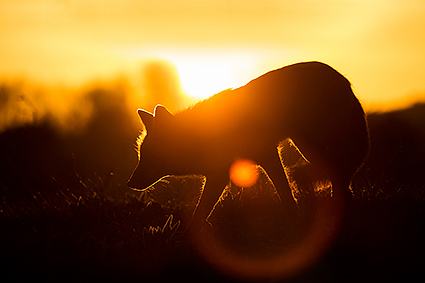 The Red Fox is one of my favorite subjects and one i have been photographing as an ongoing personal project for many years. They are one of the largest predators we have and are very elusive.

A Red Fox is greater than a big cat, although because of his long fur and thick tail especially in winter rogue appears larger. The Red Fox has an orange-brown, red or brown-grey fur, short legs and a long body. The spine is darker than the sidewalls and the abdomen is gray to almost white. He has a thick, long tail often with a white point. He has large pointed ears wich are black an the backside, a black-and-white snout and amber eyes. It’s winter-fur is much thicker than it’s summercoat and usually grayer in color. The Red Fox has an acute hearing and smell but seeying is less sharp.

The Red Fox can be found everywhere in the northern hemisphere except in high mountains. In Australia, the Red Fox was imported by the British. In The Netherlands mainly on the higher grounds (eastern and southern provinces and Utrecht) but extends steadily to low-lying parts in the north and west. Red Foxes also live in the dune area between the North and South of Holland.  Naturally, Red Foxes do not live on the Wadden Islands.

The Red Fox can live in diverse habitats, both in the woods and parks, heath and fens, dunes, grassland and rural areas but also at the edges of or even within villages and cities. He lives where adequate food and cover is and hunts preferably in the transition areas of biotopes.

The Red Fox is a dusk and night-animal and lives in family groups. Burrows are usually only used by the females to sleep in or in winter and spring, when they are pregnant or have their cubs. During the other seasons they sleep outside as do most males throughout the year, on a sheltered place above ground, under a dense bush for example.

If you would like to learn more about Red Foxes and photograph them in their own habitat then join me on one of my 1:1 Red Fox photography workshops.