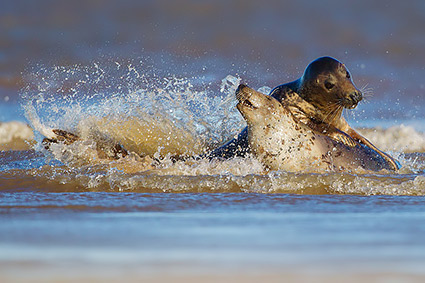 Grey seals, Halichoerus grypus have a wide variety of coloring. Males tend to have a dark brown-gray to black coat with a few light patches. Females are generally light gray-tan, lighter on the chest, with dark spots and patches. Adult males, and some older adult females to a lesser extent, have a characteristically long nose with wide nostrils, which is why this species is called “horsehead” in Canada, and why its Latin name translates to “hooked-nose pig of the sea.”

The Grey Seal feeds on a wide variety of fish, mostly benthic or demersal species, taken at depths down to 70 m (230 ft) or more. Sand eels are important in its diet in many localities. Cod and other gadids, flatfish, herring and skates are also important locally. However, it is clear that the Grey Seal will eat whatever is available, including octopus and lobsters the biggest specimens also have been suggested to attack and eat seabirds and even small cetaceans The average daily food requirement is estimated to be 5 kg (11 lb), though the seal does not feed every day and it fasts during the breeding season.

In wintertime the Eastern coastline of the UK is the place to be for Grey Seal (Halichoerus grypus) and Common Seal photography. The Grey Seals come to shore to give birth to their pups and being the largest colony in Europe this is the place i will be hosting my Grey Seal photo tour so for more information check the photo tours page on this website.