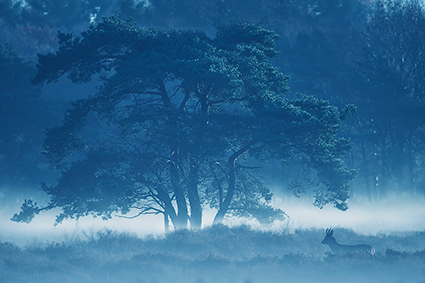 I just love getting out of bed early mornings….Well…actually..i don’t but i know that when i do it is extremely rewarding. There is nothing better then waking up to the sounds of nature and seeying the sun rising upon the horizon. I particularly like the “blue hour” just befor the sun comes up and the cold color tones this time produces. The blue hour is the period of twilight each morning and evening when the sun is a significant distance below the horizon and the residual, indirect sunlight takes on a predominantly blue hue. This effect is caused by the relative diffusability of short blue wavelengths of light versus the longer red wavelengths. During the blue “hour” (typically the period is about 40 minutes in length), red light passes straight into space while blue light is scattered in the atmosphere and therefore reaches the earth’s surface. Because of the quality of the light, this period is treasured by artists.

Twilight, dawn and dusk typically described as the half hour before sunrise or after sunset,  when the sky is still bright but there’s no longer any direct sunlight. The primary source of light effectively becomes the entire sky, with one side appearing warm and reddish and the other becoming a cool blue or purple. This can produce wonderfully soft, multicolored lighting that gives a calm, peaceful blueish mood to subjects. If you are lucky, a phenomenon called “alpenglow” may appear as a red or pinkish glow in the sky furthest from the setting sun, but it’s never a guarantee. Alpenglow can be a helpful effect for extending a sky’s warmth well beyond sunset turing the blue tones into purple and pink.

Twilights and magic hours happen in the morning and in the evening, but this doesn’t mean that the same conditions of light are repeated exactly. It will depend not only on the elevation of the sun, but also on weather conditions, pollution, particles in suspension, etc. Twilights are the time intervals happening between night and day, before sunrise and after sunset. The sun is below the horizon, but its light is visible because it illuminates the upper layers of the atmosphere. In more mathematical terms, we say that we are in twilight phase when the center of the sun is between -18° (18 degrees below the horizon) and 0° of elevation.